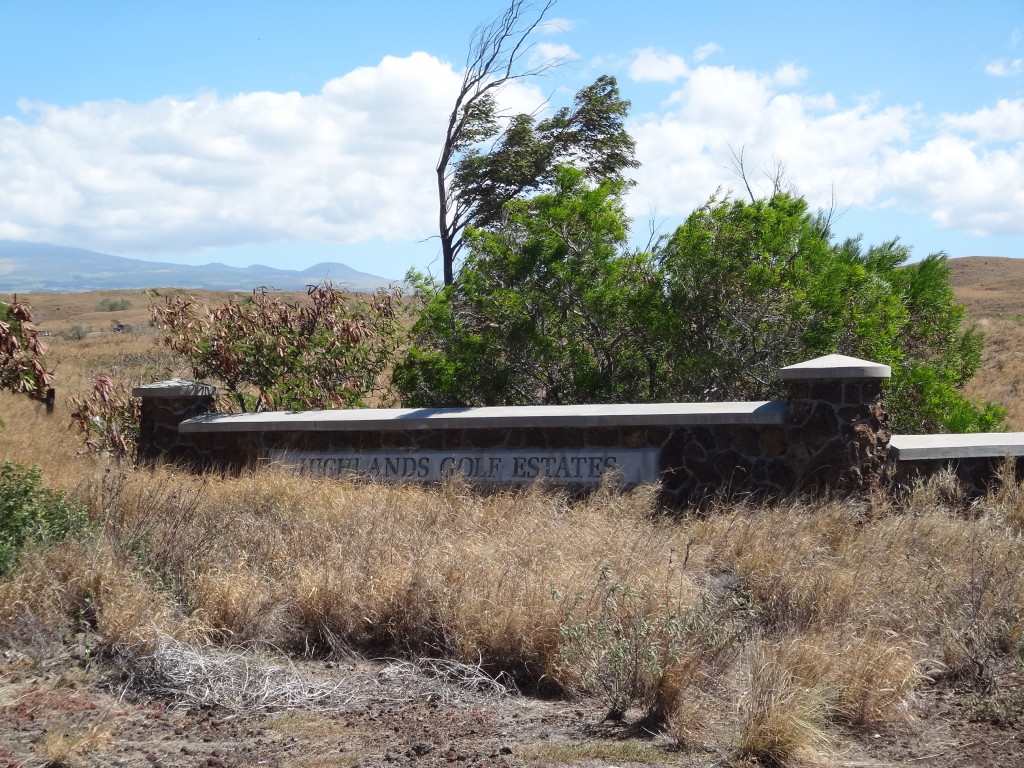 More than eight years ago, the state Land Use Commission reclassified a 731-acre parcel just upslope of the village of Waikoloa, in the South Kohala district of the Big Island. It shifted the land use classification from Agricultural to Rural at the request of the landowners, to comply with zoning conditions imposed by the Hawai`i County Council.

As with the redistricting decision in the case of  `Aina Le`a, the beleaguered proposed development a few miles down the road, the LUC imposed another series of conditions on the developers of Waikoloa Highlands. Chief among them was the requirement that full “build-out” – i.e., all infrastructure in place, final subdivision approval in hand, and intersection improvements completed – be achieved by June 10, 2018, ten years from the date of LUC approval.”

Nowadays, anyone driving on Waikoloa Road past the land that was the subject of the LUC petition would be hard pressed to see any meaningful change in the landscape from what it was in 2006, when the then-landowner, Waikoloa Mauka LLC, submitted the redistricting petition. A rustic rail fence with rock bollards erected by the previous owner in the early 1990s, when a luxury golf-course subdivision was first proposed for the site – before the state Supreme Court banned such uses on land in the Agricultural District – has largely succumbed to the elements and a wildfire. Still standing is the impressive rock-wall gate marking what was to be the entrance to the Waikoloa Highlands golf community.

Yet the most recent annual reports submitted by the owners’ planning consultant, Sidney Fuke, to the LUC and the Hawai`i County Planning Department state that plans are moving forward.

In the report to the LUC, dated February 29, 2016, Fuke recites the conditions the Hawai`i County Council imposed on the landowner when it approved time extensions for the project in 2007 and again in 2013. To date, he continued, “tentative subdivision approval was issued on April 5, 2007; the on-site infrastructure construction plans have been prepared; the construction plans for the roundabout improvements at the Waikoloa Road/Paniolo intersection have been completed; right-of access to the site has been issued to the U.S. Army Corps of Engineers for the purpose of conducting remedial investigation and removal of any residual munitions …; and efforts to dedicate 10+ acres of land situated proximate to the subject site to the County of Hawai`i for a community center and park are on-going. This is to help address the County rezoning park and recreation fair share requirement for the proposed 398-lot subdivision.”

Fuke goes on to identify the conditions of LUC approval and the extent to which his client has complied with them.

Regarding project completion: “The commission required that the project be completed no later than ten years of the date of the commission’s decision or June 10, 2018. ‘Buildout’ was defined as having completed the backbone infrastructure to allow for the sale of individual lots,” Fuke writes.

“Notwithstanding the county’s rezoning time extension of 50 lots by March 21, 2018, and the balance by March 21, 2023, the petitioner understands that the more stringent performance requirement of buildout by June 10, 2018 is binding. The basic on-site construction plans have been completed. The petitioner will thus work towards fulfilling that performance requirement.

“Although nothing physical has occurred on the ground to date, the petitioner has been working diligently to secure a development partner, as well as trying to address other conditions of approval …” (emphasis in original).

Throughout the LUC hearings, none of the parties representing Waikoloa Mauka said anything about needing to secure a “development partner.” Instead, the impression given to the commissioners, in copies of federal tax filings and accountants’ statements, was one of a company that at the time had assets of more than $60 million, more than sufficient to undertake the cost of development, estimated at $44.8 million by the R.M. Towill Corporation.

Another condition of LUC approval is that the petitioner notify the commission if there is any change in ownership. “There has been no change of ownership relative to the petitioned area,” Fuke stated in the February report.

In fact, however, the land has changed hands. On October 14, 2014, the petitioner Waikoloa Mauka, LLC, organized in Delaware, executed a quitclaim deed conveying title to the petition area and an additional 2,153-acre parcel on the north side of Waikoloa Road to Waikoloa Highlands, Inc., a company incorporated in Colorado just four days earlier. The declared purchase price for the land – whose market value was estimated by the county’s Finance Department at $7,957,100 – came to an even $1,000.

When informed of the transfer, Fuke replied that he was still dealing with the same person he had always dealt with on this project, Stephan Martirosian, and knew nothing about any change in ownership.

The land proposed for redistricting made up a relatively small part – roughly five percent – of the nearly 14,000 acres of land in the Waikoloa area that was purchased by Waikoloa Mauka in September 2005 for $56.358 million. Selling the land were two affiliated companies, Waikoloa Development Company and Waikoloa Land & Cattle Company.

Waikoloa Mauka appears to have counted on obtaining the capital for development of the Highlands project by selling off much of the property it had just acquired at a higher price than that for which it was purchased. To some extent, it succeeded. In 2007, land on the south side of Waikoloa Village totaling around 45 acres was sold for $19.5 million to a company called Metric-Passco, which had big plans for the commercial-zoned area. (That company subsequently lost the land through foreclosure.) Other parcels along Mamalahoa Highway were sold as well, bringing in $13 million more.

Altogether, Bureau of Conveyance records indicate that by the end of 2008, Waikoloa Mauka took in more than $40 million in property sales.

At the same time, however, the company was burdened by debt. In 2006, it gave a $40 million, interest-only mortgage to Morgan Stanley Mortgage Capital, Inc., secured by all 13,797 acres purchased in 2005. When Morgan Stanley published a prospectus for an offer of $1.5 billion in securitized mortgages in June 2006, the Waikoloa Mauka note was among the mortgages in the deal.

Morgan Stanley assured investors that, “Under the Waikoloa land loan, there are upfront reserves for taxes, debt service, and pre-development costs in the amount of 100 percent of projected taxes, $5,939,000 and $4,000,000, respectively. Additionally, Vitoil Corporation and Arch Ltd. have provided a full payment guarantee.” Vitoil, owned by Martirosian, and Arch, a Bahamas-based Russian oil company presided over by Vitaly Grigoriants, were the two entities making up Waikoloa Mauka LLC.

According to the prospectus, the commercial real estate brokerage C.B. Richard Ellis had appraised value of the land securing the mortgage at $169,250,000.

The initial mortgage was released in 2008, but was replaced by a $10 million mortgage given to another firm, Isis Lending (which later changed its name to Copia Lending). In 2009, the loan terms were extended as well as the amount borrowed – to $17 million.

By January 2010, Waikoloa Mauka still had not turned so much as a spade of earth at the Waikoloa Highlands site. Yet it took out two more loans that month, one for $30 million, another for $40 million, from Intercep Ltd., based in the United Kingdom. Although Intercep was dissolved for failure to file required reports with the UK government eight days after the mortgages were recorded in Hawai`i – and more than three years after it had last checked in with the government – its director, Michael Dutton, still managed to assign the mortgages to a Ukrainian entity, IV Trading in March of 2011.

The parties involved – Intercep, IV Trading, and Waikoloa Mauka – were closely related. Dutton, the director of Intercep, at one point signed a satisfaction of mortgage on behalf of IV Trading. And in February 2012, the vice president of IV Trading, Remington Chase, filed with the Bureau of Conveyances notice that the loans had been satisfied and the mortgages were released. Chase, in other words, as an officer of IV Trading, was holding the notes for loans given to himself and Martirosian, as the members of Waikoloa Mauka, LLC.

The $70 million note was off the books, but the loan held by the unrelated party, Copia, remained unsatisfied and by 2016, Waikoloa Mauka was in default. On May 26, Waikoloa Mauka signed over more than 7,000 acres of its Waikoloa holdings to a new company formed by Copia, called Waikoloa Mauka Land Corp., issuing it a deed in lieu of foreclosure. Adding up the purchase price for the dozen properties conveyed, the total value of the assignment came to $20,645,000.

By then, however, Waikoloa Mauka LLC – the petitioner in the LUC case, and not the new Waikoloa Mauka Land Corp. – held just 10 acres: a triangular parcel at the intersection of Pua Melia Street and Waikoloa Road, abutting the Waikoloa Highlands parcel.

Even after freeing themselves of more than $20 million in debt, the landowners were not in the clear. In February 2015, Envision Entertainment Corporation – a Hollywood production company owned by Chase and Martirosian — borrowed $1.275 million from 77 Holdings, LLC of Provo, Utah, an entity formed two months earlier, pledging the two parcels still owned by Waikoloa Highlands as collateral. The note was payable as of March 1, 2016. As of press time, no release or amendment of the mortgage had been filed with the state Bureau of Conveyances. 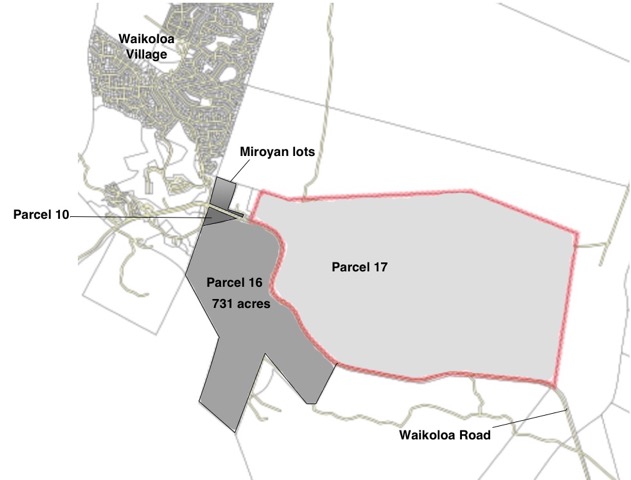 Before those deadlines can be met, the developer has to complete construction of a roundabout at the mauka entrance to Waikoloa Village, satisfy all fair-share contributions to the county ($12,772.64 per lot), install all utility lines, build the roadways, and obtain approval of subdivision maps, among other things.

With roughly a year and a half to go, odds are those deadlines won’t be met.

When asked about his client’s plans, Fuke told Environment Hawai`i only that he expected the landowner would be asking the LUC for a time extension. “Given the need to finalize construction drawings and having everything else approved, it’s very likely an extension request will be made,” Fuke said.

But is the project still viable?

The movie production firm, Envision Entertainment, that has taken out the loans secured by a mortgage against Waikoloa Highlands’ property, was administratively dissolved by the Wyoming secretary of state’s office in March of this year, for failure to file required annual reports.

Efforts to reach Martirosian for comment were not successful by press time.

Companies Mentioned in this Article

Many of the companies involved in the Waikoloa Mauka deals have similar names. Here is a brief rundown of the players:

Waikoloa Highlands, Inc. This company was incorporated in Colorado on October 1, 2014. Although it owns the property where the Waikoloa Highlands subdivision is to be developed, it is not registered with the Hawai`i Department of Commerce and Consumer Affairs (DCCA). Its business address, in Glendale, California, is one shared by other Martirosian-affiliated companies.

Waikoloa Mauka, LLC. This is the Delaware-registered limited liability corporation established in 2005 to take title to roughly 14,000 acres of lands sold by Waikoloa Land & Cattle and Waikoloa Development Co. It filed annual reports with the DCCA up through last year; the DCCA now lists it as not in good standing. It holds title to 10 acres in Waikoloa, at the intersection of Waikoloa Road and Pua Melia Street. Its business address is the same as that of Waikoloa Highlands.

Waikoloa Development, Inc. This corporation was formed in Colorado on October 15, 2014, and registered to do business in Hawai`i on April 20, 2016. On October 27, 2014, it took title, by means of a quitclaim deed, to a 1,700-acre parcel immediately upland of the Highlands site. In May of this year, it gave the title to Waikoloa Mauka Land Corp., one of several transactions undertaken in lieu of foreclosure against Waikoloa Mauka, LLC. It was voluntarily dissolved in September. Its business address is also in Glendale, California.