In January 2014, the Hawai`i County Department of Finance prepared a list of those properties it intended to auction on January 16 for failure to pay property taxes. Ten of the 76 parcels belonged to Waikoloa Mauka, LLC.

At virtually the last minute, on January 12, the back taxes, penalties, and interest – amounting to $1,275,870.30 – were paid off. And the payment wasn’t from Waikoloa Mauka, according to a source in the Finance Department, but rather from one of its creditors, fearful that the auction would impair the value of land securing its notes.

Not included in the properties proposed for sale at auction was the 731-acre parcel where Waikoloa Mauka plans to build its Waikoloa Highlands subdivision and the 2,153-acre parcel across Waikoloa Road to the north.

Since then, Waikoloa Mauka and its successor, Waikoloa Highlands, Inc., have kept current on their taxes, missing payment due dates by days only on a few occasions.

However, with the property taxes having been reduced on those two parcels together to less than $750 a year, paying them should not be a problem.

Even though the County Council and Land Use Commission have approved zoning changes that should, if anything, have increased the value of the smaller property, the county’s tax revenue took a nosedive. (A staffer with the county Finance Department explained that regardless of zoning changes, tax rates won’t change until work actually starts.)

The dramatic reduction in the tax bill is a result of Stephan Martirosian, a principal of Waikoloa Mauka, having applied for an agricultural use rate starting in 2011 for the larger lot and 2013 for the smaller one.

The application to be taxed at the rate for pasture use on the Highlands lot was dated August 8, 2012, 16 days after the accumulated taxes and penalties on the property had been paid.

For this property, at least, no agricultural use has been declared, meaning that although it is 1.4 percent the size of the Highlands parcel, the property tax on it is nearly 15 times that of the larger parcel.

A question arises as to why tax bills could be allowed to go unpaid years without the properties being put up for auction at county tax sales. A staffer at the Finance Department stated that as a general rule, the county will consider properties for sale after two years of delinquencies. However, he added, “it depends on the tax collectors.” The Big Island has three collectors, each of whom is responsible for the tax sales in their area of jurisdiction, he continued.

“Just because something is delinquent over two years, it doesn’t mean it’ll be on the tax sale,” he said. Other factors come into play, and, he added. “Especially if it is land only, sometimes it will be delinquent for a while before the tax collectors put it up for sale.” 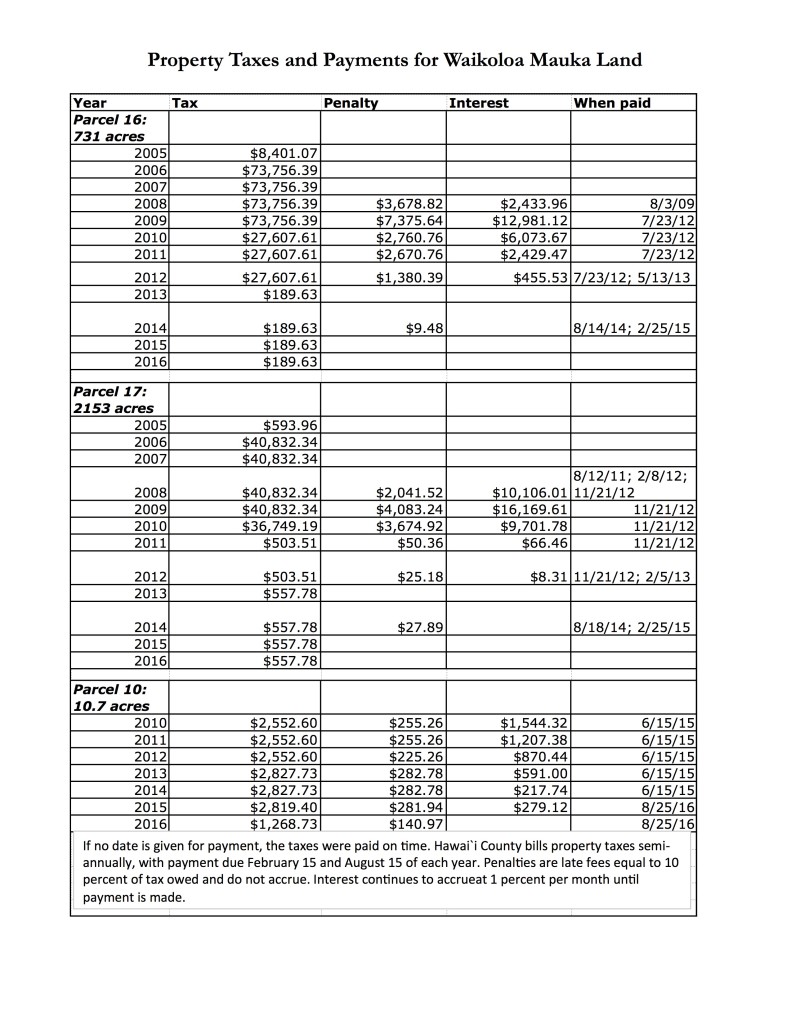