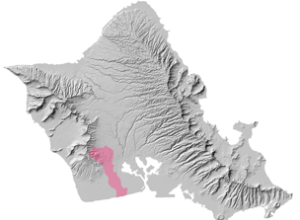 It seems the state Board of Land and Natural Resources may be the one to decide whether the contested case hearing over the Conservation District Use Permit (CDUP) for the Kalo`i Gulch Drainage Improvements at One`ula Beach Park will continue with Kua`aina Ulu `Auamo (KUA) as the petitioner in place of native Hawaiian limu expert Henry Chang Wo, Jr., who passed away in September.

KUA’s and Chang Wo’s attorneys with the Native Hawaiian Legal Corporation filed a motion with the Land Board on September 17 asking for the substitution, as well as for an expedited decision on whether or not the project needed a supplemental environmental impact statement (SEIS).

On October 23, attorneys for the permit applicants — Haseko (`Ewa), Inc., the University of Hawai`i, the state Department of Hawaiian Home Lands, and the City and County of Honolulu’s Department of Planning and Permitting — argued that the 1st Circuit Court, not the Land Board, had the authority to decide whether KUA can take Chang Wo’s place in the case, which was appealed to the court in 2014. They also argued that KUA, a non-profit group of native Hawaiian cultural practitioners, lacked any special interest or right that would be directly or immediately affected by the CDUP. If issued, the permit would allow the lowering of a sand berm at One`ula Beach Park to allow stormwater runoff to enter the ocean where Chang Wo collected limu and taught community members how to maintain the beds. Such an interest, the applicants’ attorneys argued to the Land Board, is required to achieve standing in a contested case.

To allow KUA to take Chang Wo’s place as petitioner “would be to open the back door to KUA’s participation where it would not have been allowed entry through the front door,” their memo in opposition states.

In their October 27 response, NHLC attorneys David Kimo Frankel and Liula Nakama pointed out that their motion was filed under the Land Board’s administrative rules, not a Circuit Court rule. And under the board rules, it has the right to allow substitutions following the death of a party in a contested case. “And in fact, [1st Circuit] Judge [Rhonda] Nishimura expects nothing less, as she made clear in chambers,” they wrote, referring to comments she made during an October 2 status conference.

The standard for such a substitution under the Land Board’s rules is simply that good cause must be shown, Frankel and Nakama wrote.

“It would be illogical and unfair to interpret [the Land Board’s substitution rule] to allow perpetual corporations and agencies to freely substitute and sell interests, but deny that ability to Native Hawaiians who live, breathe and die,” they wrote, adding that the suggestion from the applicants’ attorneys that the substitution motion was intended to circumvent the Land Board’s contested case rules was insulting.

“There was no reason for KUA to intervene in the contested case hearing earlier because Uncle Henry was already doing so, and the BLNR’s rules discourage redundant intervention. … The applicants are arguing that Native Hawaiian cultural practices enjoyed by generations of Hawaiians can be extinguished by the death of a single Hawaiian. The fact that Native Hawaiians use this area to gather limu and fish has never been in question,” Frankel and Nakama wrote.

Not only should the Land Board authorize the substitution, they argued it should also immediately decide whether the applicants need to prepare an SEIS, which is an issue the 1st Circuit Court remanded to the board.

“The parties submitted arguments and proposed findings as to that issue seven months ago. [The board] can and should render its decision right away,” they wrote.

In a November 4 filing, the applicants’ attorneys agreed that Judge Nishimura “did indicate an inclination to have the board, rather than herself, render a decision on the motion to substitute.” However, they took serious issue with the NHLC’s statement that she had expressed an “inclination … to allow the substitution to take place.” She did not say that, according to a declaration by Haseko attorney Yvonne Izu.

“It would impugn Judge Nishimura’s integrity to suggest that she would express her inclination on a matter without having even reviewed the pleadings,” the attorneys wrote.

They also disputed the NHLC’s claim that they had insisted on scheduling a status conference so soon after Chang Wo’s death. University of Hawai`i attorney Lisa Bail countered that it was Judge Nishimura who had requested the conference, not the applicants.

Their filing was not provided for under the Land Board’s order on the NHLC’s substitution motion, but the applicants’ attorneys wrote that they had to comment on the NHLC’s “misrepresentations,” especially since the Land Board may make a decision on the motion without holding oral arguments.

They asked that the board either consider their arguments in their decision making or schedule oral arguments.

The Land Board had not issued any ruling by press time.