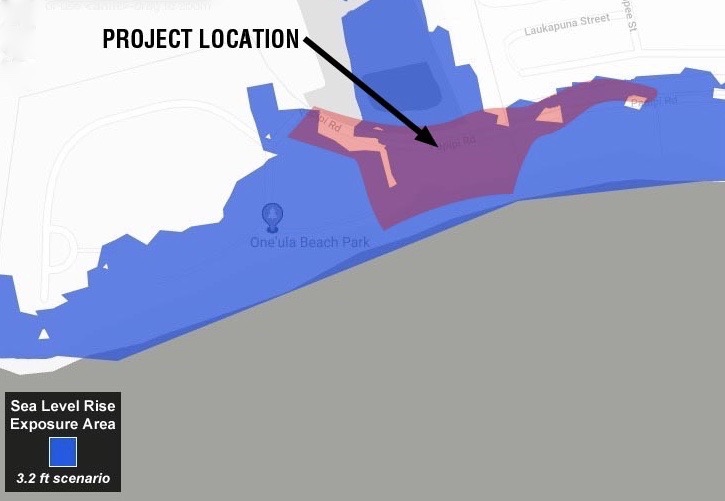 After a series of setbacks, those seeking to protect limu resources in Ewa Beach got a reprieve at the December meeting of the Board of Land and Natural Resources. The board voted 6-1 to deny an easement and construction right-of-entry permit for a drainage project at Oneula Beach Park intended to allow more runoff from Kaloi Gulch to enter the ocean.

For more than a decade, Haseko (Ewa), Inc., has advocated for the drainage improvements. The Ocean Pointe developer originally intended to direct runoff from its residential project into the marina it planned to build, but was thwarted by the City and County of Honolulu over worries that the proposed drainage channel would interfere with a sewage outfall in the area. Instead, the city granted Haseko a Special Management Area use permit to alter a sand berm at the nearby beach park to allow stormwater to enter the ocean there.

However, when Haseko came to the Land Board in 2007 for a Conservation District Use Permit (CDUP) for the project, native Hawaiian cultural practitioners who gather limu from the area objected and initiated a contested case hearing. Following the recommendation of its hearing officer, the Land Board voted in January 2009 to deny Haseko’s permit application because it felt that with the proper infrastructure, runoff could be contained within the 7,500-acre gulch.

Haseko tried again to obtain a CDUP in 2012, this time with a slew of new co-applicants: the University of Hawaii-West Oahu, the Department of Hawaiian Home Lands (DHHL), and the Honolulu Department of Planning and Permitting (DPP). The university and DHHL lobbied for the drainage project because it would allow them to develop lands designated for runoff retention. Then-DPP director David Tanoue called the drainage project a “key component of continued development of Kapolei as a second city.”

The board approved the permit, which was again challenged by limu gatherer Henry Chang Wo. After another contested case hearing, the Land Board voted in June 2014 to uphold its approval. Chang Wo, represented by the Native Hawaiian Legal Corporation, challenged the decision in 1st Circuit Court, which remanded to the board the matter of whether a supplemental environmental impact statement (SEIS) needed to be done because an endangered Hawaiian monk seal had been spotted in the project area.

Before the board decided on that issue, however, Chang Wo died and efforts to fulfill his request that the community group KUA replace him were unsettled at the time of the Land Board’s December 2018 meeting. The courts had, however, recently denied efforts by the NHLC to stay work on the berm pending the outcome of its appeal.

Because the CDUP requires construction begin to begin in a year and be completed in three, Haseko sought the board’s permission in December to access the land and begin work. According to a report from the Department of Land and Natural Resources’ Land Division, the berm alterations would take about one month to complete.

Because the Land Board had issued a CDUP for the project and determined that an SEIS was not required, the granting of an easement and right-of-entry permit might have seemed like a foregone conclusion to some. It wasn’t.

When the board took up Haseko’s request, board members immediately questioned the company’s attorney, Yvonne Izu, about why the project was necessary, especially when Izu had informed the board that Haseko’s developments in the area had adequate stormwater storage.

“Why do you need this if you have storage?” Land Board chair Suzanne Case asked. Kauai board member Tommy Oi then said he would support lowering the berm only when it becomes necessary. He later noted that on Kauai, sand at river mouths is removed during emergencies, but is brought back afterward.

Board member Chris Yuen, however, said he thought there was no harm in lowering the berm now and added that parts of Ocean Pointe could flood if the project did not proceed. Lowering the berm by four feet would allow a 10-year storm to overtop the berm, he said.

“If it’s greater than a 20-year storm, it will overtop the berm anyway,” Izu added.

“It may,” Yuen acknowledged, before adding that such things are hard to determine with much certainty.

To Downing, the potential impacts of sea level rise also needed to be considered. He asked how many feet sea level needed to rise before the ocean starts flooding the area. According to the Land Division report, Haseko plans to lower the berm and raise the channel bed at Oneula Beach Park, resulting in a 500 x 100-foot grassy swale 4.5 feet above mean sea level.

The Honolulu Climate Change Commission has advised that planning and development along the shoreline should take into account a rise in sea level of between 3.2 feet and six feet. Also, a recent study by University of Hawaii researchers found that a four-foot rise in sea level at Ewa Beach would result in “enormous flooding” by groundwater and the ocean.

“If we start lowering things on our island for a 10-year flood … there’s more chance of ocean going in than flood going out,” Downing said.

Yuen replied that in the coming decades, someone could put the berm back, and with sea level rise, “the berm will start to eat away, too.”

Several members of the public, including KUA members, testified in opposition. KUA’s Wally Ito testified that storm water was harmful to limu and that increased urbanization resulted in less recharge to the aquifer. KUA executive director Kevin Chang also questioned whether limu in the area would be safe to eat if it’s exposed to all the heavy metals and motor oils that are carried in stormwater runoff.

“Do the right thing for our resource. … There are options other than cutting down the sand berm,” Ito said.

“We believe you must ask yourself whether the applicant … will not interfere with a public trust purpose,” Chang later added.

Michael Kumukauoha Lee, who had opposed the CDUP a decade ago, suggested that the Land Board require all users of the outflow to “put in scrubbers so runoff doesn’t affect the limu” and to require an SEIS. He said he would request a contested case hearing if the board did not agree to his recommendations.

With the CDUP-related matters still under appeal, NHLC attorney Alan Murakami argued that the Land Board was required to take a precautionary approach in evaluating Haseko’s request. In the contested case hearing and court records, he argued, there had been no affirmative showing that the additional runoff resulting from the berm alteration won’t harm the limu or its consumers.

To this, board chair Case said she was confused by Murakami’s arguments. “This is a request to grant an easement. … The substantive issues have already been evaluated [in the CDUP hearings],” she said.

“No, they have not been,” Murakami replied, noting that KUA has so far been barred from making substantive arguments before the board and is appealing that situation.

He also pointed out that Izu was the only person present to argue in favor of the easement and right-of-entry permit. No one from DHHL, DPP, or the university showed up to testify in support. What’s more, Murakami said, Haseko has indicated it does not need the berm to be lowered to complete its development projects. Given that, “What is the rush to grant this easement?” he asked.

Yuen replied that he, too, wants the case to be heard on the merits and was disappointed that the court did not support the Land Board’s decision to allow KUA to replace Chang Wo as the petitioner. However, he continued, the kind of storm that would cause runoff to overtop a lowered berm would also result in dirty water flowing into the ocean everywhere else. “Those were the findings at the end of the contested case hearing. I think they’re well supported. You can challenge that. I hope you get the chance to challenge that [but] I don’t think a day [of] water going into ocean, rapidly dispersed, is going to affect limu,” he said.

Murakami conceded that Yuen’s take on runoff effects was probably true from the standpoint of a casual beachgoer. “Our clients are dealing with actual consumption,” Murakami pointed out, adding that the Land Board is required to find that the project poses no harm to the health of those who gather and consume limu from the area.

“Yes, there’s reason for concern. Nobody likes pollution, [but] you’re talking about absorbing toxins by a plant. A plant will not absorb toxins in a day,” Yuen replied.

“If that is so, an expert should be able to say that,” Murakami said.

Board member Downing also took issue with Yuen’s characterization of the problem.

“I cannot sit here and listen to someone tell me or say that one hour of freshwater, two hours of stormwater, cannot destroy things,” Downing said.

“No, I said the toxins would not be absorbed in an hour,” Yuen interjected.

Even so, Downing continued that recent heavy rains in Aina Haina, where he lives, resulted in thousands of dead shrimp and some dead octopuses on the beach.

“I’ve never seen so many mantis shrimp on my beach. That was just a few hours of fresh water,” he said. As for limu, “the silt that’s going to come down is going to strangle the limu. … I’m not the scientist, but I saw it happen. The only limu that survives this is the gorilla ogo and the mudweed [both introduced species],” he said.

Yuen noted that the effects of runoff can differ from spot to spot, depending on how much mixing there is and how long the freshwater is in contact with the ocean floor. In the case of Oneula Beach Park, “we had this hearing, we had testimony, we had the findings … that the storm runoff was not likely to harm the creatures,” Yuen said.

Murakami noted that the board’s decisions in this case have not been unanimous and said he hoped further evidence would convince the board not grant the permit and easement.

Board member Stanley Roehrig agreed with Murakami about the need to take a precautionary approach and made a motion to deny Haseko’s request. He said lowering the berm should only be allowed if there is an emergency proclamation by the governor.

Yuen said he preferred to defer the matter pending a decision on the appeals by the court.

The rest of the board, however, seemed to side with Roehrig.

Before the vote, Izu made one last comment. “This thing about the impact on limu … that was all part of the contested case. This board nevertheless approved the CDUP. I don’t think this is the time to re-litigate these issues. If you would like to defer it because it’s not needed now, that’s the board’s decision and something I could live with.”

Downing seemed to oppose the project for reasons that went beyond the impacts to limu and its consumers. “The more people we get, the more resources we lose. Where is balance? I’m not for one side or the other. Yes, limu is important to me. I grew up on the beach. Development is important to me, but where is the balance? … How much do we need to develop?” he said.

In the end, the board voted to deny the easement and right-of-entry permit.

“I think it’s premature. The procedural issues haven’t been worked out,” Case said.

Yuen was the sole dissenter.

•“NHLC: It Would Be ‘Illogical, Unfair’ To Bar Substitution in Kalo‘i Gulch Case,” December 2015;