Laniakea Ruling: On July 5, the Department of Land and Natural Resources (DLNR) granted an appeal by shoreline access advocate Doug Meller of a shoreline certification obtained by the state Department of Transportation (DOT) for its jersey barriers at a popular city-owned parking area at Laniakea Beach on O‘ahu’s North Shore. Meller had provided photos to the DLNR showing that the barriers impeded the high wash of the waves and argued that the shoreline can’t be set at the seaward edge.

Initially, the DOT had put up the barriers in December 2013 to block public parking across the street from the beach because the pedestrian traffic to and from the lot was clogging traffic and posed a public hazard. Concerned surfers who had used the parking area sued, twice, alleging that the DOT had failed to obtain a special management area (SMA) use permit and a shoreline variance from the City and County of Honolulu to install the barriers.

The 1st Circuit Court later required the DOT to remove the barriers and not replace them until it received all necessary permits, but on August 24, 2015, the agency put them back. Two years later, it applied for a shoreline certification, a prerequisite for an SMA permit. The state surveyor recommended approval of the certification, but on August 1 of last year, Meller appealed.

DLNR director Suzanne Case ultimately determined last month that the DOT’s shoreline certification was improper. Her decision, however, notes that to properly certify the shoreline, the DOT does not need to remove the barriers, but does need to prove that they are 1) an authorized improvement or 2) that they don’t interfere with natural shoreline processes.

Meller noted in an email to Environment Hawai‘i that the DOT has not monitored the inland wash of winter surf and has no data to document that it is not episodically obstructed by the barriers. What’s more, he wrote, “the DLNR ruling explicitly found that ‘…waves wash at least to the base of the concrete barriers in their present location. Therefore, the concrete barriers likely interfere with the natural shoreline processes.” He also noted that an SMA permit and shoreline variance “require an Environmental Assessment (which the DOT doesn’t want to prepare) and a certified shoreline survey.” Meller says the attorney for the plaintiffs in the lawsuit is seeking a settlement that mitigates congestion, improves safety, and retains public parking. 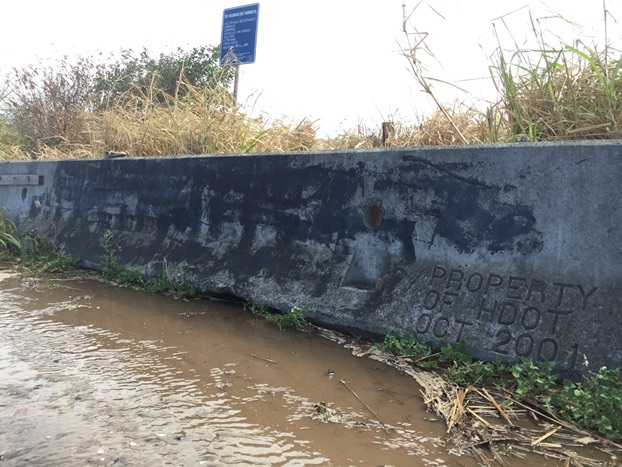 The condominium was granted a Conservation District Use Permit in 2014 to construct a similar sheet-metal/revetment project, but failed to obtain the required approval from the state Legislature and governor for an easement for the portion of state land upon which the erosion control project would sit. As a result, the condo board decided to move the shoreline hardening project inland. But that, the groups argue, still isn’t legal.

“The new sheet metal armoring project is Hololani’s attempt to work around its failure to obtain approvals for a different seawall and rock revetment from the state earlier this year. … The Legislature rejected the project and did not pass a concurrent resolution during the 2018 session after a tremendous outpouring of community opposition to Hololani’s proposed seawall,” a press release from the groups states.

The groups argue that Hololani’s new project still extends beyond private lands and onto the public beach, and therefore, still needs an easement as well as a certified shoreline determining the location of that easement. Hololani had applied for a shoreline certification, but later withdrew the application, claiming that it was no longer required.

“Shoreline hardening can cause erosion, harm reef ecosystems, fisheries, monk seals, and dissipate beaches leading to the accompanying loss of lateral access. Kahana Bay was once rimmed with large expanses of sandy beaches. As the shoreline has become increasingly hardened, Plaintiffs, which include Hawaiian cultural prac- titioners, observed decreases in limu and changes in fisheries,” the press release states.

The Environmental Court was expected to hold a hearing on a preliminary injunction on July 27.

(For more background on this, see our July 2014 Board Talk item, “Board Approves Seawall to Protect a Maui Condo,” available at www. environment-hawaii.org.)