Tenants of the state’s Natural Energy Laboratory of Hawai`i Authority are, like all other tenants of state-owned lands, expected to pay property taxes based on the assessed value of the land and improvements they occupy.

In the case of many of those tenants, property taxes have gone unpaid for years. In a few other cases, tax bills have inexplicably dropped to zero in recent years, although previous tax bills were comparable to those sent to other NELHA tenants.

Environment Hawai`i asked the real property tax division of the county Department of Finance to explain the discrepancies. The only person who could answer our inquiries, we were told, was the tax assessor for the area. She, however, was out of the office for the entire month of July.

NELHA does not routinely inform the tax office of changes in tenants. And, since NELHA tenants are not required to record their leases with the state Bureau of Conveyances, the county has no way of knowing who is occupying the land and is responsible for taxes. As a result, some of the parties listed as sublessors of NELHA lots on tax rolls no longer occupy the property. Examples include Hawai`i Deep Marine (still on the tax rolls), Troutlodge Marine Farms (now taken over by Jamestown Point Whitney Venture), and Noritech (defunct, but continues to be billed by the tax office).

Meanwhile, other tenants in what NELHA calls its research campus (the more makai end of the NELHA property) have gone for years without ever being billed for property taxes. These include Kampachi Farms, LLC (which owns the giant off-shore cages where kampachi is raised to market size), and Fatfish Farms, LLC, dba Kanaloa Octopus Farm, which hosts daily commercial tours for $30 a head.

Greg Barbour, executive director of NELHA, says that the organizations on the research lot “are typically carrying out R&D work and demonstrations, and/or are pre-commercial or research projects. These projects are also considered short-term.”

Here is a breakdown of some of the property-tax anomalies for a few of the tenants. 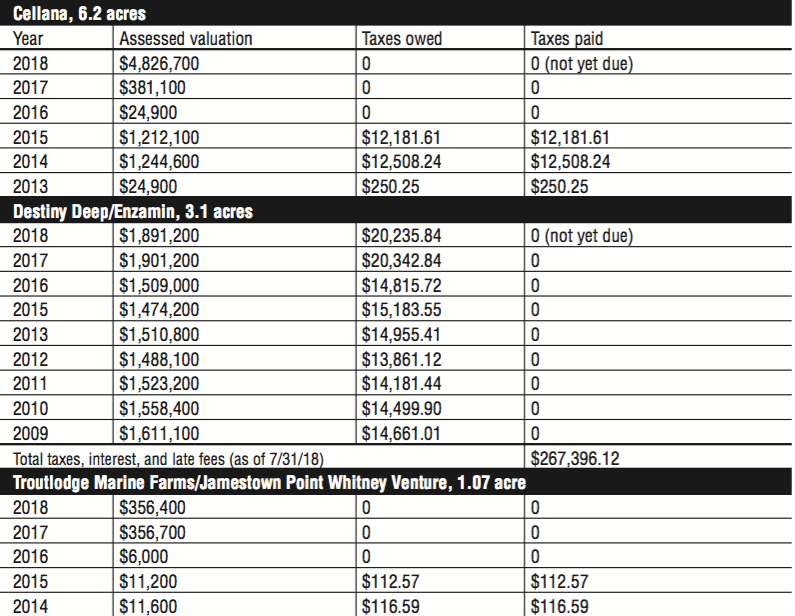 Barbour says that NELHA “does inform the county of any new activity regarding long-term leases (including new leases and terminations) so that the county may keep track of tax liabilities.” However, “it is tenants’ responsibility to pay taxes when due.”